How I Demoted Money and Promoted Peace of Mind 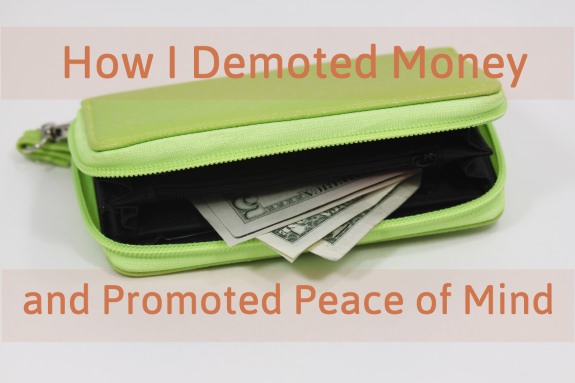 Joel’s note: this is a community story from Chelsea Baldwin.

In theory, we all know that money is simply a means to an end.

But in practice, we blow it up into this thing that’s so important that we let it control our lives. Money decides where we live, what career paths we pursue, and can even get in the way of our precious relationships.

It seems crazy, doesn’t it? We let a practical resource carry so much weight that it’s ranking for ending marriages is just below domestic violence.

Similarly, food is a means to an end, but I don’t know of any couples who have broken up over dieting habits. What is it about money that gets us wound up so tight that we can’t even see straight?

Confession Time: My Most Valued Possession Was Money

I don’t know what gives money so much power over us. But I was honestly surprised when I realized it controlled me so much, too.

Recently, I was wrapping up two years of living and working in a foreign country by backpacking around. And I knew that, once I finished those few months and got back to reality, I didn’t want to waste time flailing around and getting depressed because I felt like my life didn’t have any direction.

I also knew that I’d need to start generating an income because, even though I was traveling on the cheap, the money I’d saved up from my job wouldn’t last forever.

So I did a life and values assessment to figure out what I wanted my next move to be. And that assessment revealed something I never would have guessed about myself: my most valued physical possession was my emergency fund.

I couldn’t believe that money – just sitting there in a bank account – was the one physical item that I valued most.

But I quickly realized it wasn’t possessing money that I latched onto so tightly. Rather, it was the feeling of security it gave me. If something major happened, I knew I wouldn’t have to go back into debt to cover my expenses because I had an emergency fund.

Figuring Out How to Demote Money

I partially took the life and values assessment because I also knew that I needed a fulfilling way to make money. I’d just quit my job six months before in order to set off traveling, and I knew I didn’t want to find myself back in a politics-driven, soul-crushing corporate atmosphere just to afford a life that avoided living in my parents’ basement.

But I felt like I could afford to give money a demotion after understanding why it was so important.

That meant I could be the boss of money instead of letting it (or lack of it) dictate my emotions.

Becoming the boss of money isn’t an easy thing, though, especially when our culture revolves around it for even basic necessities. It’s hard to “demote” something that quite literally feeds you dinner every night.

First, I had to figure out why I felt like money was so hard to control. So I started reading about personal finance and how others got their money under control.

You know how they did it? Budgeting.

But rather than feeling liberated by budgeting advice, I felt like I was digging myself into an even deeper hole.

I’m all for smart allocating and planning monthly amounts needed to meet financial goals. However, the level of micro-management these financial gurus attached to what was “needed” for successful budgeting made me realize why so many people constantly feel overwhelmed by money.

How am I supposed to know how much I’m going to spend annually on gifts so I can divide that by twelve and set that exact amount aside every month so it can magically balance out to zero on December 31? What happens if I make a few new friends and get invited to their birthday parties?

(My teeth hurt just thinking about these questions.)

So I had to ignore all that micro-managing advice and do something else.

Rather than budgeting exact amounts for clothes, gifts, and going out every month, I set up my own system and rules. A sort of minimized budget, if you will.

Here are the core steps:

With this, I take care of my needs first before I ever worry about whether or not I have enough money or start scrambling to get more of it. And that’s it. That’s all I have to worry about when it comes to money. It feels incredible.

Since I’ve put this personalized system in place, I’ve realized that I don’t need nearly as much income as my peers claim they (or I) should have to stay financially afloat.

It’s a huge relief. I’m usually making more than I need each month, but if a thin period of freelancing comes along here and there, it’s no big deal. Plus, I’m also able to properly contribute to my retirement for the first time ever, which feels absolutely wonderful.

I’m one of those crazy people that actually wants to live to 100+, so knowing that I’m actively taking care of Future Me is incredibly empowering and helps me sleep well. I’m also able to build up my treasured emergency fund, which only gives me more peace of mind.

Demoting money and simplifying my budget has been one of the best things I’ve ever done. I can’t remember getting emotional over money since I’ve taken these steps, and it continues to pay bigger dividends over time.

So did my rude awakening help you see or avoid one of your own? Share your insight in the comments and let us know.

Chelsea Baldwin is the owner and lead writer of Broke Girl Gets Rich, a personal finance blog that helps people take practical steps so they can go from being flat broke to financially stable. She’s passionate about simplistic budgeting, and has created a basic budget sheet you can use to figure out how to best allocate your money so you can achieve your financial goals.